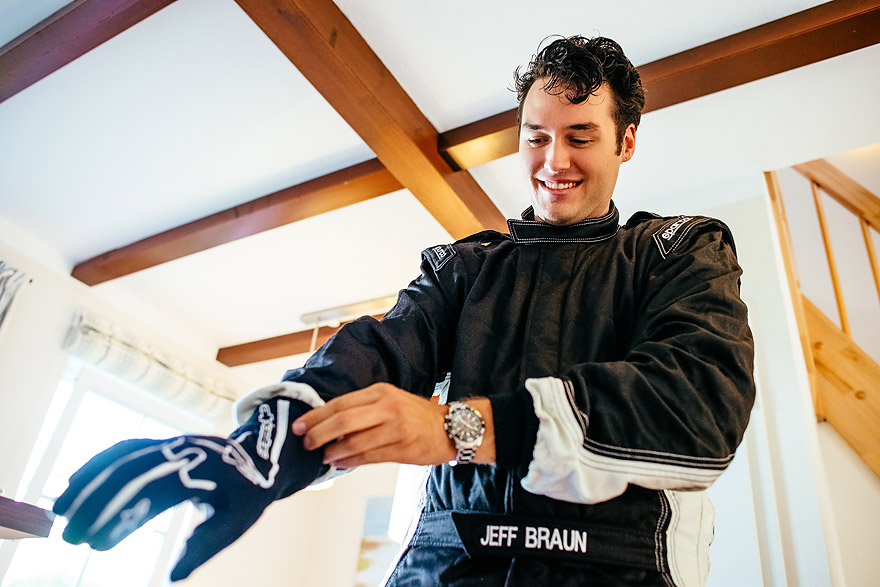 What would you think after receiving this two sentences in the first email from Joanne and Jeff (they are from California, USA): “Our wedding is going to be in the Nürburgring in Nürburg, Germany. It’s going to be small, but super fun!”? I don’t know about you, but I was really excited! After the second email, when I realised that it will be the first wedding ever at famous 150.000 – capacity motorsports complex with the world’s longest race track (it features a Grand Prix race track built in 1984 and a much longer – 20,8 km long old “North loop” track, which was built in the 1920s and has more than 300 metres of elevation change from its lowest to highest points, that’s why it was nicknamed “The Green Hell”), I was out of my mind. I knew it will be super special wedding. Actually super special is not enough to say…

So what happened? A lot! Joanne and Jeff are both amateur race car drivers and engineers. They’re extremely creative. They DIYed some important pieces in the wedding to make it unique to them… Joanne is a modern, extremely intelligent and independent woman. She’s unbelievable! Besides that she has designed by herself her wedding dress, painted violate math equations from the engineering fields on her veil, 3D-printed a heart-shaped puzzle ring box, made her hair dress and make-up, she even drove the super fast McLaren MP4-12C to the ceremony location in her violet high hill shoes (the McLaren driver seat was way too big for her, so they had to stuff the seat with pillows that her feet could reach the gas pedal…). 🙂 Jeff was wearing his black racing suit with his name, racing gloves and shoes.

The wedding venue was on the track curve with the view on the race track. The wedding ceremony was going on during the race and racing cars can be very loud… It was so funny, when in the middle of Jeff’s wows a car drifted through the turn that even Jeff stopped talking and all the wedding guests turned down to the track. 🙂 And it was at the same time very emotional, also because Joanne’s dad passed away when she was young, but he was spiritually very much present at the wedding – Joanne saved him a seat and put his pictures on her heels to signify him walking her down the aisle. Beautiful and touching…

Then running around with bubble guns, having fun with Chinese umbrellas, but mainly enjoying the extraordinary day near the race track. We made some pictures with vintage racing cars and enthusiastic racers that were there for the ADAC vintage car race. Uh, it was fun! 🙂

The wedding continued with the reception in magnificent Castle Schoenburg (Schloss Schönburg) in beautiful Rhine Valley, which is on UNESCO World Heritage List. We have made some photos also in the beautiful castle secret garden high above the river Rhine. At the end the purple cake, designed of course again by Joanne and Jeff. Yes, the whole wedding was in the purple and turquoise colour. The amazing wedding planners Nadja and Farhad from Mosaik Hochzeitsagentur did a wonderful job, everything was perfect!

And the last but not least – Jeff’s wedding ring. It was also designed by Joanne (it’s unbelievable what she is capable of) and made by Beeghly and Keim Jewelers in PA. I have never seen something like that before, it’s a really unique design. From close it is quite weird, but when you extend your hand and look through the ring you can see Joanne and Jeff’s name. After the wedding was published on American OffBride wedding blog, Joanne began to receive inquiries… Life is unbelievable right, you never know where it takes you. 🙂

Final words: crazy good experience with extremely intelligent, fun and energetic couple!
Joanne and Jeff, thank you so much for your trust in me and my work! Your wedding was unbelievable! <3

We use cookies to ensure that we give you the best experience on our website. If you continue to use this site we will assume that you are happy with it.Ok