Zemono Manor (also called “Lanthieri Belvedere Manor”) in the Vipava Valley is a very special wedding location. Not only because I was born not far away and I’ve been a wedding photographer at Zemono Manor so many times… It stands on a hill in the middle of the Vipava Valley, surrounded by vineyards and old wild chestnut trees. The view from the Manor plateau is phenomenal. You can see the surrounding hills, almost to Nova Gorica. The sunsets at Zemono are wonderful. Zemono Manor has a unique charm, it gives an archaic feeling, but with the airy energy, to which certainly contributes the characteristic bora wind. It is therefore no surprising that is one of the most desirable wedding locations in Slovenia. Zemono Manor also boasts a superb restaurant “Gostilna pri Lojzetu” with an outstanding chef Tomaž Kavčič, who always impresses with the culinary innovation.

The interesting thing about Zemono Manor is that it offers many different wedding locations – spots which create a special atmosphere at different times of the year and during the day. From the possibility of having an outdoor wedding on all four sides of the mansion, to the wedding in the beautiful court cellar or in the wedding hall… Depending on the wedding couple, what suits them best.

It’s not a surprise that Klementina and Vasja decided to have their wedding at Zemono Manor. A wonderful couple! They live in the United Arab Emirates, in Abu Dhabi. They’re both athletes and nature lovers who are very excited about life. Certainly their family and friends too… The atmosphere throughout the wedding was so warm and welcoming.

Klementina was preparing in the manor. Makeup was arranged by the excellent makeup artist Empera. Three very entertaining bridesmaids helped Klementina with other preparations. Vasja had two best men and they could easily overcome the time before the wedding ceremony together. Everything went smoothly.

The Zemono Manor was built in Renaissance style in 1683, as the hunting and annual manor of the Italian counts of Lanthieri, who lived in Vipava. Many noble feasts were held there and during the harvest they produced wine. The upper and lower floors have a square floor plan. In the main hall, there are preserved murals made by an unknown author, representing the fantasy landscapes of the seasons. The exterior of the manor is adorned with a stone arcade corridor that surrounds all the ground floor. The wedding ceremony of Klementina and Vasja was very relaxed and intimate, full of emotions and genuine joy. The sophisticated wedding took place in a beautiful nature on the south side of Zemono Manor.

The ceremony was followed by wedding portrait photography – portraiture of the wedding couple and their bridesmaids and best men. We found suitable locations in the surrounding Vipava Valley. The beautiful sunlight also contributed to this wedding photoshoot, the newlyweds were glowing. We made some portraits, including other wedding guests, in front of the manor, with the bronze torso of sculptor Zdenko Kalin.

The wedding dinner with the excellent food of Chef Tomaž Kavčič, who also staged a mist of liquid nitrogen, added to the sophistication of the event. The wedding party was amazing and one of the stars of the evening was definitely the groom’s sister, who sang some songs very expressively. Among other interesting happenings, the bride was stolen and taken away. The groom’s best man tried to rescue her by a heroic ride on the roof of a van and he was successful.

A wonderful couple and an amazing wedding! All the best to Klementina and Vasja on a new journey and thank you so much that I could be your wedding photographer at the beautiful Zemono Manor. 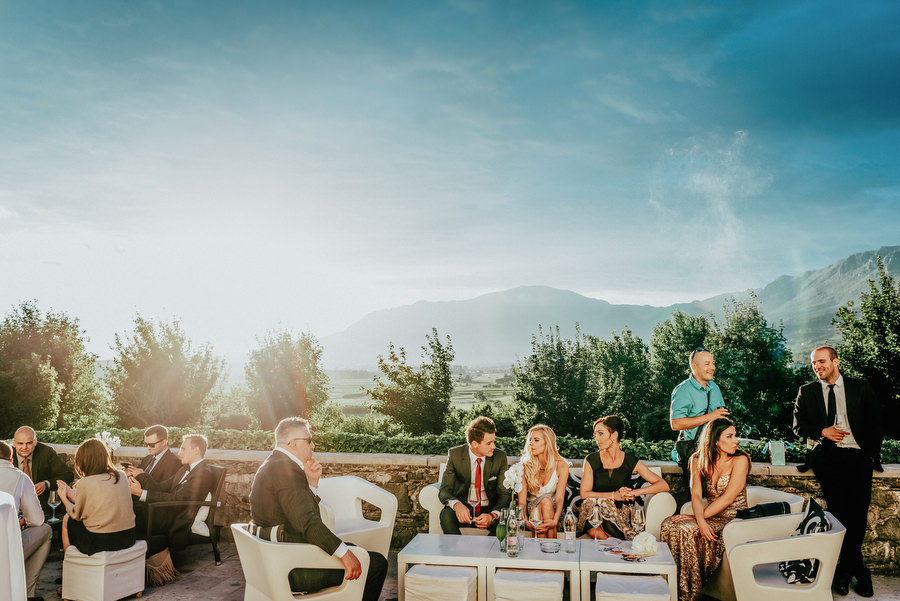